We love a great beer or ale, but finding an equally-great venue that serves them up properly is often a challenge. That’s why the Armsby Abbey in Worcester, MA had been on our radar since we heard about its opening in 2008. They are serious beer connoisseurs. Unfortunately, our schedules over the past couple of years only permitted a few quick stops in “The City of the Seven Hills.” Last week, after a recent run through the Berkshires of Western Massachusetts and Connecticut, we had a window of time to explore Worcester in greater depth. Stopping at the Armsby Abbey was the obvious choice for some light fare and some extraordinary brews. Several years back our expectations of a specialist pub were set by one of the finest in the country: The Brick Store Pub in the Atlanta, GA suburb of Decatur. They knew their Belgian ales; they knew their other European brews; and they knew their American artisinals. We soon discovered that our new place in Worcester did too – and then added some New England flare. 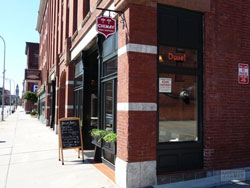 The Armsby Abbey, though a relatively small establishment, boasts a rich selection of American microbrews and craft European offerings. Beer enthusiasts will find many things to savor, but novices need not worry because the staff is quite generous with their assistance. We ordered Malheur 10 and Malheur 12 Belgian ales. Joe Scully, or any of the other talented members of the Abbey team, freely offer direction and recommendations. We spent time chatting with Joe during our visit about the selection and pairing processes. He is passionate and knows his beverage and menu offerings in great detail, something we’ve come to expect from better destinations in New England. Many of the Abbey’s brew selections change regularly, with current draught choices posted on a large, prominent black board across from the bar. The Abbey catalogues bottled beers separately, many with impressive pedigree and others lesser known, but equally good.

Beers and ales are not the only things the Armsby Abbey knows well. They also specialize in boutique distilled spirits and limited-production American wines. On the dining side, their “Farmhouse Menu” consists of fresh, artisan products, many of which are locally sourced and organic. Rather than make a substitution of lesser quality, the Abbey will simply not serve an item should they run out of a small purveyor’s ingredient. We were impressed by the menu’s variety, categorization, and especially taken by their “slates,” which are carefully chosen selections of farmstead cheeses, meats and various condiments. The “New England Slate” is a cornucopia of New England products from Connecticut, Massachusetts, Rhode Island, and Vermont, that also includes local honey from Princeton, MA along with mustard from Worcester.

It was great to find a world-class pub like the Armsby Abbey in Worcester. Their bias toward locally-sourced, New England fare made it even better.