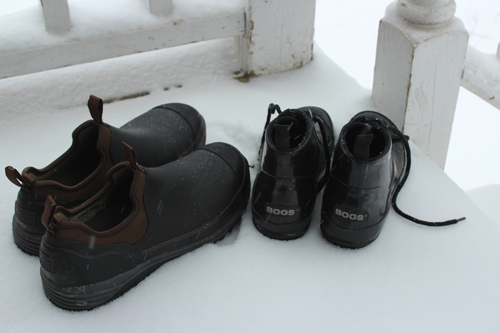 Snow. Snow. Snow. There’s always a frenzy when a good ‘ole nor’easter works its way toward New England in the winter time. The store shelves are cleared of bread, water, and milk. The firewood is piled high. Many are glued to their televisions, changing stations from one meteorologist to the next looking for any extremes in the forecast. Have we not seen this before? This is New England and it snows here in the winter. Last year we commented on the non-stop snow. This year, we’re turning to Whittier for some rationale reflection.

For those of you not familiar with John Greenleaf Whittier, he was a famed 19th century American poet born in 1807 in Haverhill, Massachusetts. Today, he is not well known, perhaps his works eroded by the tides of time or eclipsed by the moon of Robert Frost. In Essex County in Massachusetts, you’ll find his name attached to the occasional street or school, likely found in a Victorian-era neighborhood. His homestead is remarkably preserved, though like many great buildings in the region, only open seasonally. Nonetheless, we thought it fitting to summon Whittier on this cold, windy, and snowy New England evening. We’ve included an excerpt below, but the complete poem can be found here. In the meantime, we’ll go sit by the fire, admire the Christmas tree, and listen to the snow brush up against the window panes.

To the Memory of the Household It Describes, This Poem is Dedicated by the Author

The sun that brief December day
Rose cheerless over hills of gray,
And, darkly circled, gave at noon
A sadder light than waning moon.
Slow tracing down the thickening sky
Its mute and ominous prophecy,
A portent seeming less than threat,
It sank from sight before it set.
A chill no coat, however stout,
Of homespun stuff could quite shut out,
A hard, dull bitterness of cold,
That checked, mid-vein, the circling race
Of life-blood in the sharpened face,
The coming of the snow-storm told.
The wind blew east; we heard the roar
Of Ocean on his wintry shore,
And felt the strong pulse throbbing there
Beat with low rhythm our inland air.

Meanwhile we did our nightly chores, —
Brought in the wood from out of doors,
Littered the stalls, and from the mows
Raked down the herd’s-grass for the cows;
Heard the horse whinnying for his corn;
And, sharply clashing horn on horn,
Impatient down the stanchion rows
The cattle shake their walnut bows;
While, peering from his early perch
Upon the scaffold’s pole of birch,
The cock his crested helmet bent
And down his querulous challenge sent.

Unwarmed by any sunset light
The gray day darkened into night,
A night made hoary with the swarm
And whirl-dance of the blinding storm,
As zigzag, wavering to and fro,
Crossed and recrossed the wingàd snow:
And ere the early bedtime came
The white drift piled the window-frame,
And through the glass the clothes-line posts
Looked in like tall and sheeted ghosts.

So all night long the storm roared on:
The morning broke without a sun;
In tiny spherule traced with lines Of Nature’s geometric signs,
And, when the second morning shone,
We looked upon a world unknown,
On nothing we could call our own.
Around the glistening wonder bent
The blue walls of the firmament,
No cloud above, no earth below, —
A universe of sky and snow!
The old familiar sights of ours
Took marvellous shapes; strange domes and towers
Rose up where sty or corn-crib stood,
Or garden-wall, or belt of wood;
A smooth white mound the brush-pile showed,
A fenceless drift what once was road;
The bridle-post an old man sat
With loose-flung coat and high cocked hat;
The well-curb had a Chinese roof;
And even the long sweep, high aloof,
In its slant spendor, seemed to tell
Of Pisa’s leaning miracle.